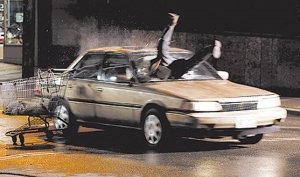 Brandi Boski, a youthful carer at an old people’s home, seems to have it good: a comfortable apartment, a healthy social life, and the distinct possibility of a promotion at work. On the other hand, there is Tom, an out of work middle-aged man who is swiftly bundled out of his lodgings and onto the streets, forced to try to spend the night on a park bench. They inhabit completely different spheres, but their paths (literally) cross when, whilst attempting to drive home after a drink-fuelled night out, Brandi crashes her car into Tom, who survives the initial impact, but which results in him getting impaled in the glass of her windscreen.

‘Stuck’ may well be a massive understatement for Tom’s situation, but it applies too to Brandi who, fearing for her future, opts not to help him but to drive the car back home, park it in the garage and try to work out how to get out of the mess she has found herself in. Shockingly, this premise is based on a real incident, the infamously grisly case of a Texan hit-and-run with a difference where the actual driver left her victim in the garage until the man eventually died. She was later tried and convicted of his murder. Thankfully, the film’s plot only borrows from this horrific story up to a point, and then wisely starts to picks its own path, by turns a thriller and blacker-than-black comedy.

Stuck comes to us from horror maestro Stuart Gordon, who most famously made the now-classic adaptation of H.P. Lovecraft’s Re-Animator (1985), and has been consistently making cult films ever since, often attracting big-name talent. Here, we have Mena Suvari as the hapless Brandi and a terrific Stephen Rea given the somewhat thankless task of being attached to an automobile for most of the duration. The story is well constructed and has enough twists to sustain itself for its 85 minute duration, and for an exploitation film there are a surprising number of moral questions asked of the audience: would we care so much if Brandi wasn’t young and attractive, or if Tom was ‘just’ an ‘ordinary’ bum? A neat subplot involves Brandi’s Hispanic neighbours, who discover the vehicle next door, but do not report it to the authorities for fear of their own discovery and deportation. In each of the film’s situations, no-one is really entirely demonised, but in acting in their own self-interest the darker side of their humanity is revealed. But then, what would YOU do in their situation?

As an aside, I love IMDB’s ‘recommendations’ section, apparently there to offer advice as to what films to watch if one enjoyed the one you have currently selected; browsing casually through those suggested for Stuck, I was astonished to find Malèna (2002), Giuseppe Tornatore’s slow-moving Sicilian period drama about one man’s coming-of-age, and a beautiful woman’s increasing emotional isolation. Quite what this has to do with a low-budget exploitation film featuring a man who gets impaled in a car windscreen is anybody’s guess, but I suspect that IMDB’s formula for calculating these suggestions may not be up to scratch. Or is there some hidden link between them I have missed? Answers on a postcard, please…