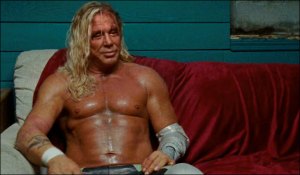 On the face of it, The Wrestler would seem an unusual winner of both widespread critical acclaim and the top prize at last year’s Venice film festival. In terms of its bare storyline, it may seem like fairly run-of-the-mill sporting genre fare: former great living off past glories, seemingly friendless except for a kindly stripper, unable to cope with ‘real’ life, and being coaxed back into the ring for one last big fight. From this basic description, it could quite easily pass underneath the cultural radar, except for two facts which draw it to our attention: that the film comes to us from former Wunderkind director Darren Aronofsky, and the extraordinary story of its star Mickey Rourke.

Here are those basics: Randy “the Ram” Robinson is an anachronism, a star of the 1980s Professional Wrestling boom, but now reduced to living in a shabby rented trailer home, working weeks stacking boxes in a supermarket, whilst continuing to wrestle part-time. However, times have moved on in the entertainment world, the theatrics of the ring no longer pulling in the big crowds, meaning venues are now small school sports halls with plastic chairs instead of large arenas and worldwide TV audiences. What does pull in the crowds however is a much more visceral form of the sport, involving such macabre items as barbed wire and stapleguns: while there was obviously some level of physical pain involved in ordinary wrestling, it is made clear that this new form increasingly blurs the distinction between theatrical pain and real pain.

What comes through from the very off is that Randy is at most times a likeable character, one hugely respected in the small but brotherly wrestling fraternity. But outside of this world he is mostly friendless, spending lonely hours in a strip club talking to what seems to be his only friend ‘Cassidy’, a middle-aged woman in a young woman’s world. They appear to share much in common, though it is in their differences that we see them for the people they are: ‘Randy’ is very much still ‘Randy’ outside of the ring, in one well-crafted scene we even hear the imaginary roar of the crowd as the camera tracks him walking down the steps to.. the meat counter at the supermarket. ‘Cassidy’, by contrast, is plain Pam outside of work, doting mother to her child unlike Randy who is estranged from his teenage daughter.

Had the film, as originally planned, starred Nicholas Cage in the title role, there would be plenty to applaud here: thematically, it is a study of identity confusion coupled with the very real corporeal abuse which The Ram undergoes – did David Cronenberg turn the project down? They feel much like the kind of recurring cinematic themes we have come to expect from the Canadian auteur’s recent films. The idea that the the 1980s idea of spectacle – as undelined by Randy’s anachronistic perma-tan and long wavy bleach-blonde hair, and musical taste which seems not to stretch to anything more recent than Appetite for Destruction – died with Kurt Cobain’s early 1990s focus on miserable realism is one which is confidently explored, and here the vérité shooting style serves the film exceptionally, counterpoint to the artifice of events inside the wrestling ring. The idea of regulation – that Pam knows that her profession has limits and rules, while Randy does not – is thoughtfully and carefully balanced.

After his astonishing debut π (1998), and the famously graphic Requiem for a Dream (2000), director Aronofsky was considered to have gone off the rails with his troubled The Fountain (2006) project, so The Wrestler is something of a comeback for him after being on the metaphorical cinematic ropes, as it were. The first surprise is how stylistically pared back he shoots the film: there is a documentary-like feel to its framing and editing, an aesthetic which serves the subject matter well, but comes as a shock to those accustomed to Aronofsky’s usual visual flourishes. The second surprise might well be the structural linearity and the seemingly genre-friendly storyline: playing it safe, directorially but once again suiting the purposes of the film without making things too showy – the director’s first signs of mature filmmaking?

However, focusing on these directorial aspects is to neglect woefully the importance to the picture’s resonance of the reappearance on our screens of Mickey Rourke: in the 1980s the impossibly handsome star of Diner (1982), Rumblefish (1983) and Angel Heart (1987), but whose off-screen troubles have come to define his career as much as those early successes. Is his role in this film an exorcism of those demons, or merely to illustrate his character faults? This can be left to idle speculation, but what is clear is that he inhabits the role of The Ram so fully that the parallels between his life and that of his character become blindingly obvious. It is an undoubtedly brave performance from a troubled man, and adds weight to what is already a very moving portrait of one man’s self-destructive imperfections.