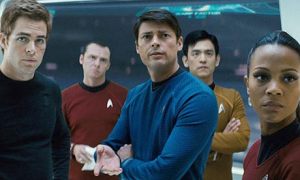 Before the screening of Star Trek, a trailer ran for the new Michael Bay travesty Transformers: Revenge of the Fallen (2009), two minutes of inhuman objects pointlessly crashing and banging into each other which seems neatly to sum up his entire film output so far. The continuing success of these films seems to be symptomatic of the state of the post-Spielberg/Lucas blockbuster market where those old-fashioned elements, story and character, now run a distant second in importance to the film’s CGI department. Ironically, this has seen the best written big-budget entertainment films of recent years being from computer-generated animation stables Pixar and Dreamworks.

Thank heavens, then, for Star Trek. Director J.J. Abrams has taken what has become one of the most tiresome franchises since Police Academy and achieved a double coup: firstly, he has entirely redrawn the familiar Trek universe and formed it into something excitingly fresh, freed from the leaden boots of the prior films. Secondly, and more importantly, he has made a good old-fashioned action film which romps along like these sort of films used to, bursting with likeable characters, a decent plot, directorial nuance and no little wit.

Casino Royale (2006) rebooted the James Bond franchise by going back to the start of the MI6 agent’s career, wiping out all that had gone before in the preceding twenty films and starting again. Star Trek could easily have done the same, showing us the young cadets on their route through Starfleet to the USS Enterprise, but what we are given here is something altogether more daring. For reasons that will be made clear, a Romulan craft has somehow managed to travel back from the year 2387 to a time some 153 years earlier; in this ‘past’, it intercepts and destroy a Federation ship, killing the Captain, a certain George Kirk, whilst his wife is in an escape pod giving birth to their son, James Tiberius.

Fast-forward twenty-odd years and the now grown-up Kirk Jr. is a somewhat reckless and aimless young man, but is talented and is eventually convinced by a friend of his late father to follow in his footsteps and use his abilities for good in Starfleet. Meanwhile on Vulcan a young Spock, finding himself bullied as a child and discriminated against as an adult for being of mixed Vulcan-human blood, decides to joins Starfleet as a rebellion against his elders’ expectations of him. The two men progress up the ranks, along the way meeting some other familiar names – Uhura, McCoy, Chekov, Sulu – if at times through some rather fortuitous and unlikely plot devices.

What becomes clear, and is subsequently explained to us in case we don’t get it, is that the time-travelling Romulan craft has created an alternate parallel reality, one where, for example, Kirk does not grow up knowing his father. This is not a prequel in the sense that these characters will eventually go on to become those in the television series and then the films, the path of their lives have been irrevocably changed. An existentially questionable idea, but one which matches some of the franchise’s other bits of bad science, and also one which allows complete freedom in subsequent films.

The scenes of the young crew members finding their feet are lively and fun, the minipop versions of the original crew still slightly wet behind their ears (some pointy) and getting used to their new vessel – Sulu not yet able to get the thing in warp speed, and Chekov’s thick Russian accent seriously raising the question as to why he was chosen to be the ship’s announcer. The casting is nearly impeccable – in particular Zachary Quinto excels as the emotionally confused and repressed Spock, topped only by the magnificent Karl Urban as the younger ‘Bones’ McCoy, whose grouchy sarcasm consistently reduced me to tears of laughter. Only Simon Pegg is miscast, horrifyingly so, but his fleeting scenes as Scotty are faintly forgettable.

Though it remains to be seen what the hardcore fanboys will make of this newly imagined Trekverse, I for one was impressed with the film’s emotional content. Though there is much enjoyable light fluff, there are also a depths of sadness: of Spock’s isolation, confusion but eventual pride arising from his mixed-race heritage, and the deepening parallels he will share with Kirk’s feelings of loss and inadequacy. Like in many a trite love story, the two men initially despise each other but events make them grow ever closer, aided by the intervention of a familiar face from the past (or is that future?).

There is so much fun to be had with the characters that it is easy to forget the serious matter of the Romulans from the future armed with advanced weaponry threatening the destruction of the entire universe. Here is where the film enters familiar space-romp territory where the new Enterprise has to save the day, and is perhaps where the film is at its weakest – the final third of the film struggles to match the magnificence of the first two-thirds. Still, the action sequences are handled well enough, Abrams’ direction filling the screen with plenty lens flares, dutch angles and gliding camera moves to keep the audience visually entertained.

J.J. Abrams blotted his copybook early on with a writing credit on Michael Bay’s Armageddon (1998), but since then he has carved a name out for himself as creator and producer of TV hits Alias and Lost. His only previous directorial effort was the passable Mission:Impossible III (2006) but with this dynamic and hugely entertaining reinvention of the ailing Star Trek franchise it seems as though he has put himself at the top of the Hollywood tree. Smart, funny, visually exciting and at times surprisingly moving, it puts the recent Star Wars and Indiana Jones films to shame, and as a piece of slightly old-fashioned blockbuster filmmaking it may announce him as the true heir to the Spielberg/Lucas mantle.