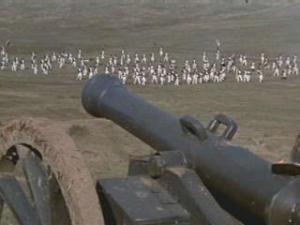 One of the great difficulties when writing about film history, as with doing any other type of history, is the need to strike a balance between on the one hand positioning the film(s) in question within the broader framework of a coherent historical narrative, whilst on the other hand making sure one is not falling into the trap of applying too reductionist a view of the context in which one is placing said texts. The most difficult aspect of this to overcome is the idea that there exists such a thing as ‘the canon’, that unspecified number of films which are considered as both artistically significant in isolation, and as important to the development of film as an art-form worthy of serious consideration.

As an illustration, consider the recent poll of the ‘Greatest Films’ undertaken by Iain Stott over at The One-Line Review blog. Unlike the decennial Sight and Sound poll which asks for contributors’ top ten films, this poll expanded the number to fifty in the hope of spreading the net wider to include personal favourites alongside the usual canonical suspects. As the S&S poll has done since 1961, the survey was inevitably topped by Orson Welles’ Citizen Kane, that perennial favourite perceived as only being enjoyed by the critical elite rather than the wider public. Elsewhere, the rest of the top fifty predictably consists of recognizably canonical films, and only one made after 1990 (Pulp Fiction), another symptom of the tenedency for older films to domniate such lists, a phenomenol which Adrian Martin refers to as ‘the Citizen Kane canon’.

Yet beneath this apparent tacit agreement with traditional view of film history, the real devil is in the details: of the 3037 films suggested, over half of them were suggested by only one of the 187 participants. Whilst weight of numbers favours the ‘great’ films, there is an underlying diversity of opinion which is under-represented in the collation, but can be seen to exist outside of traditional top ten polls. Stott’s next project is entitled ‘Beyond the Canon’, and seeks aims to look beyond the paradigmatic view of the story of cinema and highlight these less well known but important films. After all, regardless of their critical stature, are not the most important films those which we have the greatest personal connection to?

For more information, and details on how to submit suggestions, see here: http://beyondthecanon.blogspot.com/