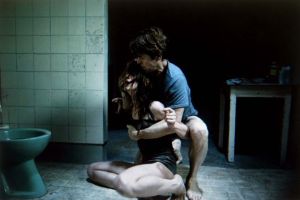 I know of more than a few people who are able to watch Nicolas Roeg’s majestically unsettling Don’t Look Now (1973) and not be moved by it. Worse still, aside from the happenings in its oft-criticized denouement, the film’s lack of conventional scares lead some to consider it not to be a ‘horror’ film at all. This, of course, depends on one’s expectations of the genre, and those who go into Roeg’s film wanting to see a thrill ride more akin to Halloween (1978) will be blinded to its powerful psychological message: that in the wake of the loss of their child, the central grieving couple are not only thrown into a sorrowful mourning, but what also becomes manifest, in the husband in particular, is an overwhelming feeling of powerlessness in the face of fate’s arbitrariness, allowing a previously unerring belief in rationality and order to be shaken to its very core.

I take time to mention this in relation to Antichrist for a number of reasons. Firstly, it shares the same jumping-off point and covers similar psychological terrain as Don’t Look Now: a grieving couple trying to come to terms with their loss but in radically different ways from each other. Secondly, like its illustrious British predecessor, it is an unconventional film whose combination of familiar horror tropes with arthouse leanings inevitably harkens back to the earlier era of auteurist horror films made in the wake of Rosemary’s Baby (1968), the period from which contemporary horror gained its hard-won critical reputation. And like Roeg, director Lars von Trier is an experimentalist, interested in playfully deconstructing cinema and reconstructing it in his own image rather than aping what has come before.

However, a word of caution. For all of his talents, of which even his greatest detractors cannot deny, there is always an element of mischief surrounding von Trier’s work, a sneering cynicism typical of many postmodern pranksters which leads to a widespread suspicion among critics as to how honest his artistic intentions are. Is he an enfant terrible whose films are Nabokovian chess puzzles intended to stimulate debate, or merely a disaffected self-publicist, a directorial equivalent of Dennis the Menace?

Ever since its début at Cannes earlier in the year, Antichrist has been variously labelled offensive, misogynistic, pornographic and sadistic, and, as is their wont at Cannes, was met with boos and laughter from the gathered audience of festival attendees. Since then, the more reactionary elements of the media have been predictably up in arms about its content, creating the storm in a teacup of controversy which the director presumably intended. As such, not only is it impossible now to approach the film without the shackles of preconceived genre conventions, but also without prior knowledge of the film’s more graphic content, and hence losing some of the shock value. As blogger Matt Singer put it, “it’s the difference between walking into an ambush and walking to the gallows”.

The story, should we forget to mention it, goes as follows. A couple, who for the duration remain unnamed, are making love in the shower when their young son in another room manages to climb out of a window and fall to his death. The He, in his capacity as a practicing psychologist, somewhat unwisely elects to treat the She using exposure therapy, trying to isolate and contain her irrational fears. After prolonged examination, it emerges that these relate strongly to nature, and specifically to Eden, the couple’s cottage set in remote forestland, and where they proceed to travel to as a final stage of her treatment. It is here, though, that things begin to go awry, certain sinister things are discovered and the film veers from psychological realism into the realms of the supernatural.

As with the director’s Dogville (2003), the fact that Antichrist is explicitly divided into chapters immediately admits the artificiality of its construction. As Chapters One and Two, entitled “Grief” and “Pain”, could easily be seen as a cross between Don’t Look Now and a sombre Bergman chamber film, the structure clearly delineates between these early scenes and the later more surreal and violent final two chapters, “Despair” and “The Three Beggars”. A very poorly written article in the Daily Mail argued that the film’s tonal shifts meant it would fail to satisfy horror fans and the arthouse crowd alike, as if these two were mutually exclusive – presumably the writer has not seen a horror film since Repulsion (1965). This is, though, symptomatic of why the film which fool a good number of film-goers into thinking it is something it is not; essentially what we have here is an old-fashioned occult horror film, shrouded in rather messy Christian symbolism, and made to look like something more austere; not so much a wolf in sheep’s clothing as a talking fox so attired.

Antichrist may well be better defined in terms of what it is not rather than what it is. The film’s violent content is not gratuitous, contrary to what may have been said elsewhere. Yes, it would be if in isolation, or if framed within the film differently, but by the time it arrives we have gone so deep into Biblical symbolism that it cannot be taken literally – except perhaps by those Biblical Literalists who also believe in such things as 7-day Creation and a Noah’s Ark with animals going two-by-two. The film’s famous scene of self-mutilation, whilst graphic, on reflection serves as a logical peak for the crescendoing horror, and brings a bizarre form of catharsis in the viewer. Michael Haneke’s more clearly sado-masochistic The Piano Teacher (2001) had more of a case to answer in this respect. If I have an issue, it is with the very early insertion of a shot of hardcore sex in the film’s prologue, which seems to add little to what is already a beautifully intimate scene.

Is it in fact a trap to take the film seriously at all? So much of modern film theory, particularly with regard to horror cinema, is informed by psychoanalysis, in particular Freud and Lacan, yet it is clear from the stilted, emotionally repressed character of the film’s He the contempt von Trier has for such methods. Is this poking fun at a predicted critical application of the likes of Barbara Creed’s concept of the monstrous-feminine, or Laura Mulvey’s ideas about sadistic-voyeurism? The very explicitness of the script’s discussion of the supposed alignment of the female and ‘Evil’ is so over-the-top as to render the accusations of misogyny as laughable – films that are genuinely misogynistic are never so obvious as to contain conversations about it.

I can see why some critics see the film as a trap, but I think it is more of a playful game between the director and his audience. The closing dedication to Andrei Tarkovsky was laughed at at Cannes and seen as like the bad punchline to a terrible and long joke. Anthony Dod Mantle’s breathtaking camerawork, from the hyper-stylised super-slow motion monochrome prologue through to the eerie Lynchian abstractions in Eden at times betray a clear visual debt to the Russian auteur, but the real debt is in terms of pacing and structure, and the sometimes dream-like illogic into which the film drifts repeatedly made me think of Mirror (1975). Yet for Tarkovsky, nature equalled serenity whereas here for von Trier it appears to represent ‘Satan’s church’, surely a more Herzogian view. Maybe the joke is on me too.

Antichrist is so deliberately contrary a film that analysing it in traditional cinematic terms seems foolhardy. Yes, the acting is great, the cinematography stunning, the story gripping and resolved in terms of its own admittedly twisted internal logic. At the same time, it is confusing in terms of what message, if any, it is trying to communicate, and the feeling of directorial disingenuity is sometimes hard to escape. It is hardly a film I could easily recommend anyone to watch. Yet all I can say is that after the film I left the cinema both with my stomach in knots and my imagination fired, and that this is something which happens all too seldom.