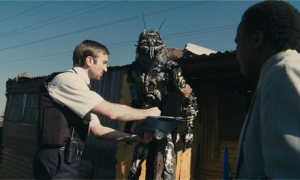 It is reflective of both the great strengths and the weaknesses of District 9 that of all of the wealth of interesting things to say about the film, almost all of these are in reference to the film’s first half hour. Almost, since despite the disappointing shape the narrative begins to take after its astounding opening, it is still an intelligent, thought-provoking and above all entertaining film for the course of its duration; the problem is that it is possible to consider it a failure because the elegant brilliance of its exposition, and what that exposition appears to promise, is sadly not matched by the predictability of its later plotting. What a shame that the film has to settle for mediocrity above brilliance.

The opening half hour of District 9 is extraordinary in many ways, but primarily it is through its use of a simple device which subverts many of the rules of traditional science fiction storytelling. We begin with a familiar scenario: a large, monstrous alien craft has appeared in the sky. In the typical alien invasion film this would come as the first plot point, usually after a lengthy amount of scene-setting, yet here this is the scene-setting: we learn that in the film’s timeframe the craft has been hovering over Earth for over twenty years in which time its inhabitants, a reptilian species derogatively nicknamed ‘Prawns’, have been ghettoised by the military into their own city suburb, the shanty town-like District 9.

The film’s second coup is setting this not, say, in New York or Los Angeles where cinematic expectation would predict such events would occur – there is even a very sly reference to this very early on – but in the South African city of Johannesburg. In a stroke it becomes immediately clear that we are in the realm of the symbolic; most obviously the presence of a starved, segregated ‘other’ race living in squalid conditions raises the not-too-distant memories of apartheid, though significantly director Neill Blomkamp has distanced his film from being direct allegorical to this. I would agree; the broad elegance of the metaphor allows it equally to be representative of many other situations of displaced populations around the world – refugee camps, asylum seeker detention centres, and hauntingly the Sabra and Shatila camps rendered so vividly in last year’s Waltz with Bashir (2008).

The initial tone of the narrative is set by its aesthetic: a combination of mock documentary talking heads and rolling news style footage assembled with such skill as to make plausible its supposed coverage of an alien invasion – much like Orson Welles achieved with his The War of the Worlds radio broadcasts over seventy years ago. The documentary format serves the exposition perfectly, instantly setting up the back-story of the aliens’ arrival before thrusting the viewer almost immediately onto the front-line with Wikus Van De Merwe, an irritating, self-satsfied government jobsworth who through nepotistic favour has been assigned the important job of relocating the Prawns to a new camp further away from the city.

Wikus’ job, though, is not going to be easy, as the Prawns demonstrate staunch unwillingness to leave, even at gunpoint. Why? Is it attachment to what have been their Earthbound homes for over two decades, or something more sinister? Here things gets more complicated, as the film begins to shift from its sole reliance on an extremely subjective documentary viewpoint to start incorporating into the narrative omniscient cinematic shots showing the aliens inside their homes apparently hatching some sort of scheme, possibly involving weaponry. It is a confusing directorial choice: by initially sticking to the documentary format, the film draws the viewer into complicity with the prejudiced ‘human’ perspective on matters alien, offering what is a stinging satire of the bias inherent in populist media coverage. Yet by bringing in more traditional storytelling elements in at this stage, the effect, while also to advance the story, is to diminish the impact of the presentation of these early scenes.

It is significant that despite the frequent shifts in film style, the film remains coherent to the viewer. Is this reflective of the modern viewer’s ability to disseminate information from a variety of different types of sources near-simultaneously? Perhaps this makes District 9 a truly contemporary film – a product of a generation used to the constant background hum of YouTube and 24-hour news channels. The film is also strikingly up-to-the-minute in terms of its visual effects. To my mind at least, it feels like a true landmark in its seamless integration of CGI aliens into the ‘real’ world, aliens which look perfectly tactile in their movements and interactions with the tangible mises en scène. This ‘reality’ of the aliens is crucial to reinforcing the film’s initial feeling of documentary authenticity.

So far, so spectacular, but come an important plot point the film spectacularly veers away from what it has built to thus-far to morph into a hybrid of overly familiar science fiction tropes, among them the pseudo-Cronenbergian body horror, evil corporation parable, gung-ho guns-a-blazing action flick, and plain old sub-ET (1982) get-the-cute-aliens-home thriller. Gone, mostly, is the documentary aesthetic in favour of a fairly straightforward storytelling structure. Gone too is much of the subtext; the central idea that the presence of foreign invaders often makes monsters of us all is replaced with two simplistic comic-book villains – the private military body MNU personified by over-zealous bloodthirsty officer Venter, and a murderous, debased Nigerian gang led by the horribly two-dimensional warlord Obesandjo. Instead of examining the wider issues of integration and racial tension, the story cops out and instead focuses on a more easily digestible battle of clearly delineated ‘good’ characters versus ‘evil’ ones.

Why does the film take such a radical turn? There is an argument to be made for its structure, if one accepts that the focus of the story is not strictly socio-political or allegorical but largely focused on the central character of Wikus and his metaphorical road to Damascus. The plot forces him to see things from the Prawns’ point of view, and so his character sees a development from yes-man scaler of the corporate ladder to sympathetic, heroic mensch. The wider message of the film is consistent: the sympathetic portrayal of the aliens by the film’s end is in contrast to the earlier views of them which were narrow stereotypes created by populist media coverage stoking up racial tensions, in doing so the film asks us to look beyond these and realize the commonalities with ‘the other’.

At the story’s centre, then, is the person of Wikus Van De Merwe, and it is thanks to a superb performance from actor Sharlto Copley that the film is able to be carried by him through its many stylistic turns. Even ignoring his physical metamorphosis, his is one of the greatest transformations in recent blockbuster memory. When we first meet him his most significant attribute would appear to be just how unremarkable he is – a middle-ranking bureaucrat, fairly incompetent in performing his job, nervous in front of the camera and largely devoid of anything approaching a personality. Yet as the film progresses he slowly grows in stature and determination, and as sympathy for him grows as his snivelling is replaced with steely resolve we eventually wish to see him receive some kind of redemption.

As brilliant as its lead performance is, it must be said that the focus on this one character is the root of the main problem with District 9. It seems strange to criticize a film for concentrating too much on character as opposed to exposition, but by narrowing the field of view to one player the broadness of the story is lost, its central metaphor abandoned, and its innovation makes way for a predictable story trajectory. There are, in a sense, two quite separate films here, both operating within their own terms perfectly well, but the opening film serving to highlight inadequacies of the following one which in isolation may not have been noticeable. It is significant that the film began life as an expansion of a short film, and it seems that this has not entirely successfully been inflated to feature length. District 9 ultimately should be judged an entertaining, at least partially thought-provoking action-filled romp.. but it could have been so much more.