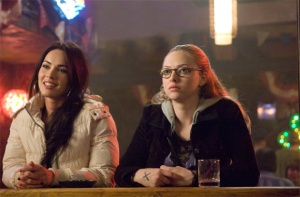 The curious thing about the success of Juno (2007) was that it made the bigger star not of its director Jason Reitman, nor its lead actress Ellen Page, but its writer and creator Diablo Cody. Perhaps on a surface level this was as a result of the distinctiveness of its relentlessly verbose, heavily stylized dialogue, but looking beyond this the film’s lasting appeal derived from the fact that at its core was an original and captivating story which did not seek to patronise its viewers or descend into nauseous Sundance kookiness.

A move to horror is perhaps unsurprising for a writer whose first film name-checked Herschell Gordon Lewis and Dario Argento, and Jennifer’s Body betrays on Cody’s part a clear understanding of, and affection for, the High School Horror sub-genre. However, the precedent to which Juno owed the most to was Terry Zwigoff’s Ghost World (2000), and once again in Jennifer’s Body that film is a key reference point, foregrounding as it does an increasingly strained central relationship between two adolescent female characters. Anita – nicknamed “Needy” – is the caricature of the bookish nerd, but who has also enjoyed a close friendship with popular cheerleader-type Jennifer since childhood. They appear to share little in common, and their chalk-and-cheese relationship is met with bemusement by their peers, yet there is a ring of truth about it; how many childhood friendship are forged as a result of circumstance and location rather than personality?

One evening, the unlikely partners head off to a local bar to see a ropey indie band whose lead singer Jennifer has taken a fancy to, a man who it turns out has a fixation on whether his young fan is a virgin or not. Soon after the gig begins, the venue becomes engulfed in a massive fire, killing several people. Jennifer, in shock, is whisked away from Needy by the singer to his tour van, only to return to her concerned friend’s house late that evening covered in blood and ravenously hungry, seemingly in the grip of some form of possession. By the morning, however, Jennifer is seemingly normal again, only now much bitchier towards her friend and with an unhealthy appetite for promiscuity.

The film is exploring terrain similar to hormonal horrors, much closer to Ginger Snaps (2000) than to Carrie (1976), and it is praiseworthy that it tries to subvert the old horror paradigm of approaching the monstrous feminine through the mediating eyes of the male; in positioning Needy as our cipher and illustrating the conflict at the ending of her pre-sexual friendship with Jennifer, the narrative arc breaks away from the usual over-played phallic symbolism and tiresome gender-based tropes. Cody’s continuing examination of the relationships of young females through popular mainstream cinema should hopefully encourage other filmmakers to do the same, whilst once again her script shows a keen ear for witty dialogue, creating its own distinctive world of plausible if overly-articulate teenspeak.

However, while there is much to comment on in terms of its themes, the surface of the film falls down on several counts. Firstly, it appears that the confines of genre do the script little favours; the narrative freshness which made Juno such a pleasingly original watch is stifled when confined in the straightjacket of horror convention, and as such the film becomes something of a tiresome spectacle of predictable plotting interspersed with stray snippets of snappy dialogue. Megan Fox is well cast personality-wise as the dislikeable prom queen but is clearly not the physical embodiment of awkward adolescence, while Amanda Seyfried, nicely cast as Needy against her previous Mean Girls (2004) persona, lives up to her nickname far too much to be a likeable protagonist. As such, there is a central lack of sympathy which makes the revenge story trajectory much harder to sustain.

Karyn Kusama, whose previous work includes the under-regarded Girlfight (2000) and the overly-ridiculous Aeon Flux (2005), provides functional if unspectacular direction, never quite pitching the horror at the correct level of scare to sate the thirst of the genre fans, nor sufficiently getting to grips with the comedy to appease the Juno crowd, usually falling between the two stools rather uncomfortably. There are visual nods to Twin Peaks (1990), particularly in the contrasting warm/cold inside/outside lighting, but if David Lynch’s work is an intended yardstick, Jennifer’s Body is sorely lacking in bite.