Both Antichrist and Martyrs arrived in cinemas amidst hails of accompanying moral uproar from both expected and unexpected quarters of the media, yet as always these blew over after the failure of either a) society to collapse or b) the world to stop turning after their releases. Viewed as a pair, they can both be seen as experiments in toying with the language of horror cinema, as well as both being exhaustingly intense viewing experiences.

Antichrist, from renowned enfant terrible Lars Von Trier, plays like a vulgar joke told with the straightest of poker-faces; shot luminously by cinematographer Anthony Dod Mantle and with an air of Bergmanian seriousness, the plot nevertheless dismantles conventional horror notions about unconscious feminine evil, doomed masculine rationality and the uncontrollable ferocity of nature, often in such a deliciously hammy way as should be impossible for anyone to take it at all seriously. And yet the joke seems to have eluded many stern-faced viewers, so much so that the final punchline, a throwaway dedication to cineaste’s demi-god Andrei Tarkovsky, drew horrified gasps rather than titters when the film premiered at Cannes. 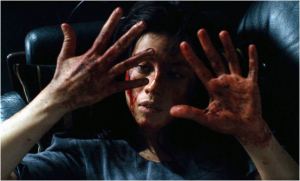 Martyrs, by contrast, could not be more deadly serious, a bleak stare into the metaphysical void rather than an exercise in audience manipulation. Inevitably placed within the recently-coined trends of Extreme French Horror and so-called ‘torture porn’, it is certainly more significant than most of what has come before in either, though not lacking in the graphic content associated with each. Like Antichrist, though, the film is in the realm of the experimental, and what comes through most strongly is how confidently it takes in familiar tropes and jumps between sub-genres, a narrative stubbornness which leaves the viewer as disorientated as its confused protagonist(s). Let The Right One In may have been a triumph for its unexpectedly effective matching of genre and tone; the achievement of Martyrs is its successful exploitation of the mores of horror sub-genres to form a coherent, singular story.

The most successful of the films which have in some way tried to deal with 9/11 and its aftermath have not been those which have focused on the larger questions of the justness or otherwise of the subsequent ‘War on Terror’; Kathryn Bigelow’s suitably muscular entry into the canon joins Paul Greengrass’ United 93 (2006) and Nick Broomfield’s Battle for Haditha (2007) as one the films which has instead sought to reflect the moral uncertainties of our times, through the lens of characters living on the front line of conflict.

Bigelow, a director for whose films the adjective ‘macho’ never seems far from critics’ word processors, has made the most bombastic and testosterone-filled war film of recent times, such a vigorously cacophonous entry into the field as almost literally to blow away the opposition: one suspects cinema screens adjacent to those showing The Hurt Locker were likely to have been caught up in the film’s sonic blast radius. This is understandable given its subject matter, a team of soldiers whose job it is to defuse improvised explosive devices (IEDs) in post-invasion Iraq, but the real triumph of the film is not its pyrotechnics in themselves, but how effectively the unbearable internal mood of claustrophobia and tension of its characters is conveyed – an extraordinary combination of dizzying handheld cinematography and a carefully constructed sound design, an overall effect which left me in nothing short of a cold sweat in my cinema seat.

The film never makes the mistake of overlaying a full-blown commentary on the Iraq invasion, looking into the faces of the locals seems to convey enough. Instead the central core is the soldiers’ own questioning of just why they personally are in such a far-flung, hostile theatre of conflict. For Sergeant William James, our eventual protagonist played with superb nuance by Jeremy Renner, the answer is that the adrenaline rush resulting from a successful defuse is for him a very real addiction, and one which is likely one day push him over the threshold to his death. Bigelow’s films have frequently meditated on the personal, seemingly irrational desire for men to throw themselves into danger; by alighting on the subject matter of the US military complex, she has made the best war film of the decade.