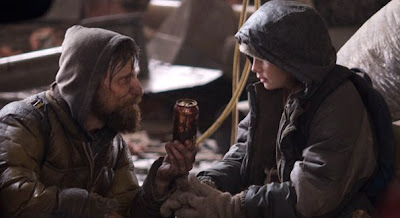 Perhaps it is the recent passing of the fiftieth anniversary of his death that brings it more readily to mind, but the spectre of philosopher Albert Camus seems unquestionably to hang over the characters in John Hillcoat’s adaptation of Cormac McCarthy’s novel The Road. The film is, in a very broad sense, existential, but more specifically it seems to be confronting those issues which troubled the French-Algerian writer throughout his life: how are we to live our lives in a universe so apparently devoid of meaning? If all is ultimately futile, is there anything which makes suicide an unacceptable escape? Can a morality still exist, and how, if at all, may one achieve a ‘happy death’?

In McCarthy’s vision, death is the only certainty, and one that constantly looms so close as to be able to touch it. An unspecified disaster has befallen the Earth – viewers may speculate as to its exact nature – which has set in motion an unstoppable environmental catastrophe: the sky grows ever darker, life has all but died out, and what remains is a deserted world of ashen, moribund tree husks and the abandoned wreckage of buildings, roads and vehicles. A handful of starving humans roam around in cannibalistic tribes scavenging for any remaining food and commodities, and as the story progresses we will see glimpses of the desperate, horrifying depths to which they have sunk in order to survive.

Also roaming this barren wasteland is an unnamed man and his young son, struggling with their cumbersome trolley loaded with what goods they have managed to forage for themselves. Through parallel flashbacks interspersed through the story we see glimpses of past events: golden-hued memories of ‘before’ and the man’s loving relationship with his wife, the coming of the apocalypse and their child’s traumatic birth, and finally the couple’s increasingly disparate reactions to the ongoing destruction, resulting in her complete abandonment of hope and flight from the family home.

In the present timeframe, the man has determined that the pair head south and towards the coast, and so the story follows their labourious journey, flanked by the twin vultures of death by hunger and murder at the hands of a cannibalistic gang. Their significant other companion is the man’s gun, loaded with one bullet for each of them, and which the father repeatedly and frantically reminds the son how to use on himself if the worst happens; better this than the prospect of being raped and eaten alive. As in reality, the role of the parent is to prepare the child to face the world without them.

Tales of earthly apocalypses are ten-a-penny in Hollywood, but however bleak their outlook, there is always the certainty in such films that their protagonists will in some way save the day in the last two reels. Not so here; the tone is unremittingly bleak, the world terminal decline and in the process of taking its last few gasps of air before expiring forever. Where, then, can any sense of hope be derived from this situation? How can the father make the son believe that life is worth living for a second longer?

It is a truism, if a trite one, that the road movie is seldom about the destination but the journey itself, and this is never a more correct observation than in The Road, though here it is a more philosophically abstract idea. Take two comparable films; firstly, Children Of Men (2005), also set in a world where life (and hope) is slowly dying out, but which observes the narrative trajectory of a thriller once the key plot point is revealed. Similarly Stalker (1979), which is more philosophically complex, yet still has a clear destination end point – the mysterious ‘Zone’ to which the characters are heading.

The question in The Road, perhaps related to the MacGuffin of the nature of the disaster itself, is why is the man so insistent in heading both south and towards the coast? Does he know it is safer there? His reasoning is never made explicit, likely because there isn’t one; it is just important that they have a direction, some form of purpose. In a later scene, when the pair discover an underground cache of supplies, enough to keep them alive and more comfortable for months, they continue on nevertheless. Survival is not enough; existence precedes essence, but it is not enough on its own; the man has embraced the Absurd and transcended it.

Director Hillcoat’s previous film, the superbly grimy The Proposition (2005), took the template of the Western and reinvented it in a nihilistic late nineteenth century Australian Outback where the rule of law is unenforceable and morality is an unobserved luxury. The Road takes this further: law is not only unenforceable but has been dispensed with altogether, along with any value attached to money or property. What remains of humanity?

What is fascinating is the divergence in political attitudes between father and son. The older, more world-weary character sees fear and danger behind every corner and in every person they meet, and is careful to delineate to his son the idea of they as the ‘good guys’ and others as the ‘bad guys’; the child, seeing through kinder but perhaps more naive eyes is less inclined to believe his father’s snap judgements, and as the film progresses is clearly forming a moral code of his own, constantly questioning that of his father. Perhaps ‘before’ the father was less wary of others, while the child, born into this new world, lacks this frame of reference. Their moralities, then, are hugely subjective, borne out of circumstance and forged by experience.

A story which is so unremorseful in its depiction of a future deprived of any sense of hope might seem like an unrewarding, morose watch, and yet the overriding message is a positive one. Camus wrote The Myth of Sisyphus in the darkest days of World War 2, exiled and alone in Paris, staring down the barrel of an oppressive, authoritarian future. And yet he looked to Greek myth and found the most hopeless of all characters – the man condemned to spend eternity rolling a rock up the side of a mountain in the knowledge of the certainty of its fall – and found hope, and laughter, in its Absurdity. It is the triumph of The Road that it also manages to find, even the the face of the most unrelenting despair, enough to suggest that life must continue be lived, and embraced.