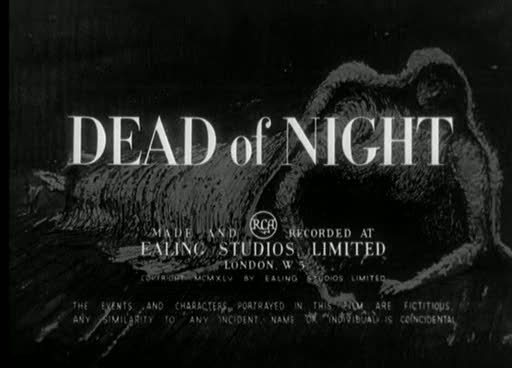 ﻿Whilst it can be said that, in the more than a century of cinema, films have been able to inspire many kinds of ideas in viewers, theories about the nature of the cosmos can seldom have been frequently among them them. Yet this is what Dead of Night, the supernaturally-themed anthology film produced by Ealing Studios in 1945, is said to have done in the minds of physicists Fred Hoyle, Thomas Gold and Hermann Bondi, whose Steady State theory of the apparent expansion of the universe apparently derived from the film’s distinctive and much-imitated meta-structure. But whilst their theory has long since been refuted in favour of the Big Bang model, the film which inspired it continues to endure as one of the true classics of British horror.

It starts oddly cheerfully, and in a broad daylight seemingly at odds with the title. A car canters along a country lane, with Georges Auric’s breezy score betraying only a hint of the sinister through the brief shiver of strings which greets Walter Craig’s (Mervyn Johns) shake of the head as he appears to recognise his destination, a country manor aptly named Pilgrim’s House. On arrival, Eliot Foley (Roland Culver), model of stiff-upper-lip Englishness the kind of which Ealing’s output is more commonly identified with, greets the spooked Craig, who mysteriously seems to be already familiar with the details of his host’s house and his gathered houseguests. Unable to recall anything more than scant details, he remains convinced that he has had repeated dreams placing him in this same situation and with the same group of people; “It sounds like a sentimental song, doesn’t it? I’ve dreamed about you over and over again”, he exclaims with bemusement.

Prominent among the group is Dr Van Straaten (Frederick Valk), a psychologist who will cast his scholarly eye over proceedings, in a way a physical embodiment of the cognitive dissonance internal to Craig as he tries to rationalise why he is able to recall these surroundings which should be entirely unfamiliar to him. The other guests humour him, and one-by-one they take it in turns to recount their own personal encounters with the supernatural. This sets up the primary internal structure of the film, the now-familiar but then-relatively novel anthology format which in this case comprises five sub-stories chained together by the link-narrative of the house party.

The anthology or portmanteau film, a format which was popularized in the 1930s with the star-studded likes of Paramount’s If I Had a Million (1932) and MGM’s Grand Hotel (1932) but whose roots can arguable be traced back as far as D. W. Griffith’s Intolerance (1916), was a convenient way for a studio to showcase the talent it held on its roster. In the case of Dead of Night, four directors shared the directing duties of the six segments: the now poorly-regarded Basil Dearden handled the linking narrative as well as contributing first tale “Hearse Driver”; Alberto Cavalcanti, who had had enjoyed previous successes at the studio with Went the Day Well? (1942) and Champagne Charlie (1944), provided two segments, and future star directors Charles Crichton and Robert Hamer one apiece.

When considering its various episodes, the inevitable tendency has been to compare their respective qualities. This, to me, seems an erroneous approach, since the film works so successfully precisely because of their differences and their position within the film’s global narrative structure. Credit for this lies with Angus MacPhail, the veteran screenwriter and script doctor who had worked on Cavalcanti’s Champagne Charlie and adapted the Palmer and Saunders story The House of Dr. Edwardes into what would become Alfred Hitchcock’s Spellbound (1945). Notably, he is also generally considered to have coined the term ‘MacGuffin’ for Alfred Hitchcock, and as Charles Drazin argues in his book The Finest Years, McPhail was taken on at Ealing as something of a problem-solver; his input here was essential in helping to weave together the seemingly disparate stories of Dead of Night into a more homogeneous whole.

The first sub-story “Hearse Driver” – in which a man has a vision which appears to warn him of his impending death – is often cited as the weakest of the film’s segments, but though it lacks the both the visual imagination and psychological effectiveness of the other stories, it plays a key role in the wider story. Indeed, the very fact that the occupation of its main focus, Hugh Granger, is a racing driver can be interpreted to be emblematic of the film’s meta-structure: the film opens and closes with the same shot of a car driving along a road, in a sense signifying Craig’s completion of one ‘lap’ in an apparently endless race. The story, lasting a mere 6 minutes, serves as a gentle prelude for the longer, more developed stories to come, as well as acting as an introduction to several of the film’s main running themes. Most importantly, its position in the narrative comes between Craig’s presaging of the arrival of a sixth character – a “penniless brunette” – and her arrival in the link narrative. The short story of clairvoyance thus is bookended by a much longer one; this mirroring is reinforced by the presence in the story of Granger’s doctor, whose rational explanations are in agreement with Dr Van Straaten.

The lack of critical attention give to the Hearse Driver segment may mostly derive from Dearden’s unsubtle directing technique, in particular the way he over-emphasises key elements of the story through a series of clumsy zooms. The key central moment – a reveal from a darkened hospital room to daylight outside – lacks drama, and the sight of the horse-drawn hearse pales into insignificance when compared to the ethereal otherworldliness of Victor Sjöström’s Körkarlen (1921). The story is not entirely without visual merit: the shot of Granger emerging from his bed, casting a massive shadow on the curtain covering the hospital room’s window catches the eye, but there is too much that is forgettable in its short duration. Nevertheless, there are two items of note which will be echoed in later stories. Firstly, the sexual dynamic in the story: while in hospital Granger flirts with his nurse, a women who will later go on to marry. Secondly, the nature of his vision of the hearse, reality and unreality being separated by the frame of his hospital window. Both motifs will be repeated later.

The second tale, Alberto Cavalcanti’s “Christmas Party”, is the film’s most straightforward ghost story. Told by the Sally, the youngest present among Foley’s gathered guests, it begins in the opulent living room of what is evidently a spacious country mansion. The frame is filled with young children scurrying about, playing games with Sally and her friend Jimmy Watson, both visibly older than their playmates. The mise en scene is rich, lively and warm, but as a game of ‘Sardines’ begins and Sally runs upstairs to hide, the upper floors of the house are revealed to be cold and cloaked in menacing expressionistic shadows. There, Sally encounters a boy who she will discover afterwards to be the apparition of a child who was murdered by his older sister in the house many years beforehand.

Despite being only slightly longer in duration than the Hearse Driver segment, it feels a much more satisfying piece and of much greater depth, Cavalcanti evidently proving himself a much more inventive, imaginative director than Dearden. The disparity between the warmth and familiarity of the living room and the cold strangeness of the upper floors is beautifully evoked, the air of mystery teeing up the sense of the supernatural which the first story was lacking. As Sally pauses in the doorway to a spiral staircase there is even a fairytale-like sense of the ethereal, not too dissimilar to Belle’s entry into the Beast’s mansion in Jean Cocteau’s La Belle et la Bête (1946), surely a reflection of Cavalcanti’s association with the French avant-garde during the 1920s. The muffled, calamitous piano score as she ascends also helps to suggest entry into an off-kilter alternate world.

Once again, there is a sexual element to the story. Sally and Jimmy are noticeably older than the young children they play with, both evidently of pubescent age and already familiar with each other as evidenced by her blindfolded recognition of the shape of his ‘silly’ nose. Their exchanges illustrate a flirtatious, deprecatory fondness between the two of them, though one might advisedly not take too Freudian a reading of the mask he wears with its large protuberant nose. His persistently makes advances, taking advantage of the coldness of the house’s upper levels, though his attempts to kiss her ultimately lead Sally to her discovery of the ghost. On encountering the boy, her very maternal tending and singing to him further suggest her own burgeoning sexuality.