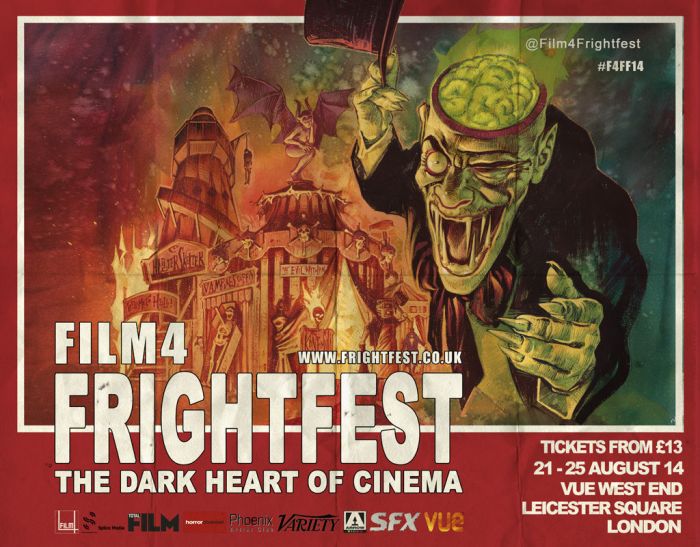 Just before the screening of the final film of last year’s FrightFest there came from the festival’s organisers confirmation of the much-circulated rumour which had been doing the rounds that weekend – that the film, Aharon Keshales and Navot Papushado’s Big Bad Wolves, would be the last film to be screened on the 1300-seat screen 1 of the Empire Cinema in Leicester Square, which had played home to the festival for the previous five years. The festival’s ever-increasing attendances from its humble beginnings 13 years earlier in the more bijou surroundings of the PCC had made the large auditorium of the Empire the logical choice of venue in more recent years, so the announcement that it would be no more inevitably came with a major concern – where would the following year’s event be held?

Fast-forward 12 months and FrightFest 2014 duly landed in Leicester Square’s Vue West End, a literal stone’s throw away from its prior abode. Not boasting a single auditorium capable of housing all of the festival’s attendees, the organisers alighted on a new arrangement: the main programme now played in three screens, with the films for each day rotated in order across them in groups of three – a particular film would play in one screen in the first slot of the day, the next screen in the following slot, and the third screen in the third slot, with the other two films in that particular grouping filling the other two screens.

Such an arrangement inevitably had the effect of detracting from the flow of the programme, most noticeably in the final 11pm slot, traditionally reserved for the wilder, more trashy or outré offerings suitable to keep the viewer entering the final phase of a 14-hour day of screenings suitably invigorated. These now would now, according to which screen one was in, potentially play in the earlier 6:30pm or 9pm slots – not such a problem for the viewing of those films themselves as much as the result that less-than-suitable films such as Home and The Samurai played last in their place.

There were, however, many pleasing benefits to the new set-up. The almighty stampede for the toilets and/or bar that had become a staple of the Empire experience at the close of a screening was alleviated by the staggering of start times, and the ticketing system for the two smaller Discovery Screens proved to be a happier affair that previously – with considerably larger screening rooms than those in the Empire there was no rush first thing in the morning to queue for even the most popular films, and allowed for greater scope to tailor the festival to one’s own whims. If then, as noted above, the midnight movie in the main screen looked unpromising, it was much easier to book into something going by the name of Wolfcop instead.

Despite the change in venue, the flavour of the festival was most certainly retained, thanks not only to the customary enthusiasm and energy of the organisers, but also the familiar melange of attendees; FrightFest remains the best place to watch horror films – in amongst a friendly, appreciative and knowledgable audience. The programme itself too continued to be an eclectic mix – variable, of course, in terms of quality, but so too continuing to push against the confines of genre definition. Eclecticism always runs the risk of dilution, but while I could have lived without the drainingly-aesthetised faux-noir of Sin City 2: A Dame to Kill For in the schedule, it was compensated for by the inclusion of the likes of Faults – a deliciously Coens-flavoured Schadenfreudian character study of a down-at-heel cult deprogrammer (a magnificently hangdog Leland Orser) which evolved into a slow Bergman-esque battle of wills with Mary Elizabeth Winstead’s apparently brainwashed young victim.

Also delving into genre-bending territory was Stage Fright, an frothily entertaining horror-cum-musical which (unlike, say, the cinematic oeuvre of Trey Parker and Matt Stone) ultimately proved too song-light, front-loading its best songs before eventually settling into a disappointingly conventional slasher. Starry Eyes was an altogether more serious look at the compulsion to act: its early evocation of the mental and physical strain of casting call woe was well fleshed out thanks to a commited performance by lead actress Alex Essoe, but its eventual trajectory into Faustian territory felt like a metaphor too well-worn to feel fresh. Meanwhile, Life After Beth – essentially My Undead Ex-Girlfriend – was amiable & funny enough on its own absurdist terms, though never quite connected with genuine emotional resonances relating to the grieving process for it to rise above the level of sitcom-esque farce. Funniest of all was Housebound, which might have begun with a pat supernatural setup but unfurled in unpredictable directions, and was strongly bolstered by charming performances, a very witty script and an eye for New Zealand-bound small town hilarity.

The most eye-poppingly odd film of the festival was Matsumoto Hitoshi’s R100, a curiously improbable mix of Koreeda-like gendaigeki, David Fincher’s The Game and BDSM kink whose first half played as a sharp social subversion of the fastidious formality of the ‘official’ surface of Japanese life. That its latter stages turn decidedly towards outright, over-the-top absurdism proved something of a disappointment, though its flamboyance would have made it a perfect match for a midnight movie slot. Lucky McKee and Chris Sivertson’s All Cheerleaders Die played in the offbeat high school hijinks register of Joseph Kahn’s bafflingly popular Detention though ultimately floundered under its mixture of tonal hyperactivity and narrative overburdening.

Adam Wingard’s The Guest toyed with, but never fully subverted the tropes of the Western-like mysterious stranger cliché, but had the benefit of a charismatic performance by Dan Stevens as an enigmatic, quietly-cuckoo cuckoo who arrives to upset the equilibrium of small town America. John McNaughton’s The Harvest, meanwhile, took a disease-of-the-week melodrama pro-forma and plunged it into psycho-thriller territory, entertaining and chilling enough as hokum but domestic misery power couple Samantha Morton and Michael Shannon frankly deserved a little better than this. More emotionally effective was Adrián García Bogliano’s Late Phases, a serious-minded look at stubborn isolation of old age focused on a blind war veteran who finds his new retirement community is being routinely terrorised by a lupine monster: ‘Scent of a Wolfman’ if you will, but held together by Nick Damici’s emotive central performance.

In more familiarly conventional horror territory, Zombeavers was the definite Ronseal film of the weekend, though its Cormanesque high concept felt stretched even at a svelte running time. Dead Snow 2: Red vs. Dead fell into the Army of Darkness trap of broadening the original film’s canvas when concision and confinement were some of its predecessor’s chief virtues, while some trying-too-hard attempts comedy involving a group of zombie-obsessed Americans hit some very bum notes indeed. More successful was Eli Roth’s The Green Inferno, a characteristically misanthropic cannibal film doubling up as multi-pronged satire, which was most effective when skewering (both figuratively and literally) naïve preppy activism. Best of all was The Babadook, which alighted on the very understandable paranoia generated by a sinister children’s book apparently featuring a silhouette of Jerry Sadowitz. A classical haunted house tale composed of familiar elements yet assembled with considerable skill, writer/director Jennifer Kent pleasingly keeps a tight rein on the subjective ambiguity of its psychological horror setup, and Essie Davis’ utterly convincing performance as a widowed mother trying to care for her troubled young son hit the festival’s most moving notes.

Spanish director Nacho Vigalondo proved to be the long weekend’s most ubiquitous guest attendee, both in terms of his supremely affable presence in and around the festival and his work appearing on-screen. His most recent work, Open Windows, at times played like a preposterous tech thriller as spoof of the preposterous tech thriller, its device of all being made to unfold on a laptop screen proving both restricting and yet curiously liberating. The gimmick, however, wore thin, and this coupled with an overstuffed second half come to stall its otherwise rollercoaster-like acceleration in pace and tension. Also screening was his slight but entertaining 2011 comedy Extraterrestrial, which used an alien invasion conceit as a MacGuffin to enable a four-handed chamber farce of mistrust, sexual jealousy and deceit.

Vigalondo also contributed a chapter to V/H/S Viral, the third in the portmanteau series which, as with previous installments, was hamstrung by both a feeble link narrative and the variable quality of its segments from its four directors. Showing them how it ought to be done in the found footage stakes was Creep, directed by Patrick Brice and featuring a terrific turn from Mark Duplass as a charming yet unshakably sinister man who pays for a stranger to film him for a day, with increasingly disturbing results.

The Last Showing, centred on Robert Englund’s put-upon projectionist facing off against a supporting cast of what seemed like soap opera cast-offs (prompting the alternative title of Freddy Goes to Hollyoaks) proved to be the only entirely risible film of the festival, although the implication that DCP rollout will inevitably lead to violence, misery and death is perhaps one which certain cinephile circles might happily applaud. Nicholas McCarthy’s Home may have boasted potentially effective non-linear flashback structure and Psycho-like changes in spectatorial point-of-view, but these devices were not able to paper over thin, derivative  material and flimsy characters, ill compensated for by cheap jump scares and seemingly aimless visual nods to Don’t Look Now. The presence of Serbian film Nymph fulfilled the role of the festival’s now-traditional ripe Eurotrash slot, though unlike previous winners Tulpa and Giallo its hokey EFL script wasn’t quite entertaining enough to send it into the realm of the good-bad.

Closing film, the much-hyped US sci-fi hit The Signal boasted a series of striking images and an initially intriguing setup, but ultimately preferred the arbitrary forward momentum of its narrative to developing the Cronenberg-esque body horror themes which it opened up, and its eventual emotional zeniths proved underwhelming, underlining the essential thinness of its characterisation. Germany’s The Samurai, a tale of small town homosexual awakening played as fairytale-nightmare, proved to be altogether more popular with festivalgoers, but despite its progressive intentions it felt compromised by the presence of its eponymous sword-wielding psycho-Trans, a step backwards into Dressed to Kill or Silence of the Lambs regressiveness. Elsewhere from the continent, Among the Living saw Julien Maury and Alexandre Bustillo doing their thing again: an lean, expertly-crafted slice of New French Extreme nastiness, though they are still yet to match the sheer visceral terror of their startling debut Inside.

All-in-all though, the highlight of the festival was Fabrice Du Welz’ Alleluia, a stunning retelling of the infamous The Honeymoon Killers true story which built from a murky Eurogrit aesthetic baseline to a feverish emotional pitch, thanks to a series of colourfully expressionist visual excursions; as a device, it worked perfectly to convey the film’s presentation of amour fou as a form of rapturous epiphany, and something which could serve as psychological justification for the possessiveness and violent destructiveness which ensued. Horror as a genre may well be serving us familiar stories, but its persistence comes from the telling of them in ever-more fresh and captivating ways.